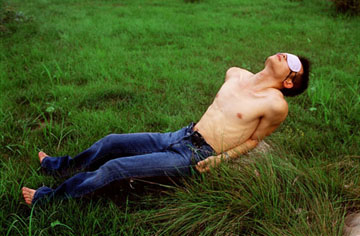 Although china became more and more open, gay in china still has a difficult life because they are not being understand. Gay are still not accepted in Chinese society, not even in Beijing. Although April 20, 2001, Chinese Psychiatric Association issued the third edition of “standard of classify and diagnose for Chinese psychosis ”, and dropped homosexuality from a list of psychiatric disorders, Public opinion is still prejudiced against gay. So they are afraid of telling their families and friends the truth. Being “in the closet” causes emotional instability, and the gay bars of the Chinese capital are the only place to meet likeminded people. Every weekend, 200 to 300 gays gather in On Off, Beijing’s biggest gay meeting place and the starting point for many one-night stands. The other problem for them is the AIDS. One survey in 2001 shows that there is 5.9% of the gays in china have infected AIDS.

Many of my gay friends are unwilling to talk about the AIDS; but they are very clear that it is just like a bomb in their life and always have the possibility to break out. I hope my photos can help my friends and tell people their true life. In order to develop an understanding of life in the gay community I lived with gays for half a year. The reason why I can get so close with them is because I am a women, I understand them and they trust me. The most important thing for a photographer is not taking photo but tell people truth and make understand. This is the real reason why I want to go on with this story.

Bio:
Yue Ren was born in 1975 in Ningxia, China. She studied photojournalism at Renmin University of China in Beijing. She is now taking her doctor course on visual communication and stay in Renmin University as a photojournalism teacher. Yue Ren is also a freelance photographer, her work published on many newspapers and magazines, such as “South China Morning Post”, “Science”. She is also a former contributor for sygma photo agency. In 2001 Yue Ren was chosen for World Press Photo seminar in China. During the three-year studying, with the help of many famous photo editors, she finished her documentary work about gay in china. In 2003, she was chosen for the WPPh-ASEF workshop for young photographers in Amsterdam. Her work has been exhibited in Pingyao international photography festival and in Amsterdam.

One thought on “Yue Ren: Gay Scene in Beijing”