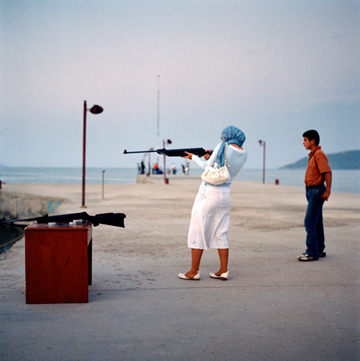 My interest in this subject began while I was working as a freelance photographer in India. Originally I hadn’t wanted to work on stories about women, but as I travelled the country on other assignments, I continually found myself coming into contact with women trodden down by the society around them.

I found myself increasingly wanting to cover these issues. But the western audience that sees my work views India as a far away backward place and isn’t surprised to see images of women struggling for their rights. Similarly, I grew to feel that there was a misunderstanding in the places that I worked of what women represented in my country.

I had the idea to look for a meeting point, a crossover between this culture and the one that I had grown up with. I decided to go to the border between Europe and Asia and see if it could offer some answers to this cultural divide between East and West. My project is called The Middle-Distance and it is an attempt to find a place that can offer an explanation to both sides of the equation.

Bio:
Olivia was born in London and grew up in the UK. She studied mathematics at Oxford University and photojournalism at the London College of Printing.

In 2003 she moved to Delhi to work as a freelance photographer covering assignments around the Indian Subcontinent. In 2006 she was invited for a one year residency with Fabrica in Italy, where she began work on ‘the middle-distance’, a project about the lives of young women along the border between Europe and Asia. This work was exhibited at the Centre Pompidou in Paris as part of a Fabrica group show and later travelled to the Milan Triennial, the Shanghai Art Museum and the Shiodomeitalia Creative Center in Tokyo.

For the past two years she has continued to work on a long-term project about women and the east-west cultural divide. This work has been supported by the Inge Morath Award from Magnum, a Bursary from the National Media Museum and the OjodePez-PhotoEspana Award for Human Values.