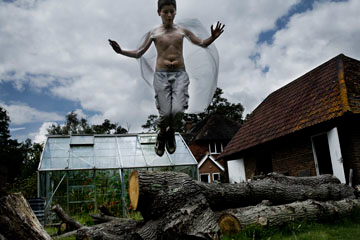 Exploring a fascination with family dynamics, and hierarchical relationships, my work looks at how the individual emerges from the structure of the family, through the complex interplay of nature and nurture. Yet as the project developed, I began to feel that despite the intimate access I was gaining into people’s lives, I was guilty of denying the importance of my own presence in the creation of the photographs. Last year I decided to turn my camera on my own family and myself. The work to date represents the first chapter of this project.

In the Shadow of Things explores the life of my mother, Bron, whose first marriage began to fall apart when I was ten. When the divorce finally came through fourteen years ago, Bron and her new partner David moved to a new life. They live in an isolated house at the end of a long dirt track, surrounded by fields and forests with their son Jake.

Twelve years later, most of the boxes from the move are yet to be unpacked. They lurk in unused rooms, waiting to be dealt with. My mother has struggled with Obsessive Compulsive Disorder (OCD) for many years. The intricate rules and rituals of this illness complicate everyday domestic life so much that piles of objects: clothes, boxes and bags that forms more layers of things and create an overwhelming burden.

For several months I have been trying to help my mother regain control of her life and home. Through photography I am trying to capture and express the feeling of being confronted by the mirror of myself, an experience both troubling and rewarding at the same time. The camera has been both a key and a shield, granting access to a world I thought I already knew but which continues to reveal itself.

Jan 2007
Winner of the Arts Foundation Fellowship for photography

Dec 2005
Awarded 15 month scholarship from Fabrica, Italy, to collaborate on the ‘Les Yeux Ouvert’ exhibition at The Pompidou Centre, Paris.