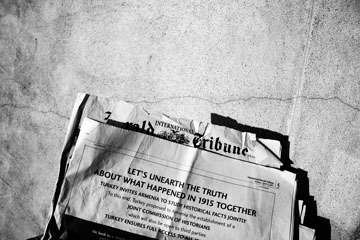 As with all ideologies, them taking hold and taking root means the termination of what doesn’t fit into the new identity. On April 24, 1915 the Committee of Union and Progress issued a deportation order to have hundreds of Armenian intellectuals rounded up and removed. Once the order was complete, they were murdered. This act set in motion the extermination of Turkey’s Armenian population.

“Memory Denied: Turkey and the Armenian Genocide” is a journey through those massacres and deportations, the loss of cultural identity, and for those Armenians who still live in Turkey, their hardship and isolation. These images show a subtle picture, a narrative of glimpses that might exist only in the minds of those who remember, or who have heard the accounts firsthand. In short, it addresses how a premeditated act committed by “new Turks” on the “old Ottomans” has manifested itself in the country’s present.

My work doesn’t categorize the massacres as genocide, but rather explores the remains and traces of an ambiguous, dark history – the definition of which is still being fought over. It is the exploration into what has happened to an entire civilization since the time of those bloody purges, and how the greater implications of Turkey’s denial continue to resonate at home and abroad. In light of the events in WWII Germany, Pol Pot’s infamous “Year Zero” and Rwanda, what took place in Turkey to a group of its citizens just before the Great War has endured and echoed into the 21st century. A survivor of the Armenian Genocide, John Minassian said, “What happens when those who harm others get away with it? What is the legacy of that silence?” Through my work and with the support of the Inge Morath award I aim to give this silence a telling face.

Bio:
Kathryn Cook is a freelance photographer currently based in Istanbul, Turkey. She is represented by Agence VU, Paris, and Prospekt Photo Agency, Milan. Kathryn Cook graduated from the University of Colorado, Boulder, in 2001 with a degree in journalism. Her professional career began with the AP in Panama in 2003. In ’05, she documented the rise to power of Bolivia’s first indigenous president, Evo Morales. She re-located to Turkey in ’06 to pursue regional stories. Cook’s photographs have appeared in publications including The New York Times Magazine, TIME, Stern, Newsweek, L’Espresso, and D La Repubblica delle Donna.

One thought on “Kathryn Cook: Memory Denied, Turkey and the Armenian Genocide”