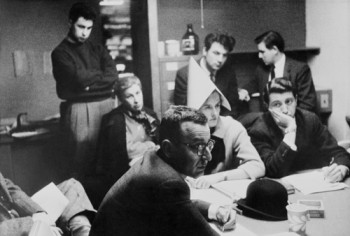 After the Second World War, Morath worked as a translator and journalist. In 1948, she was hired by Warren Trabant, first as Vienna Correspondent and later as the Austrian editor, for Heute, an illustrated magazine published by the US Information Agency in Munich. Morath encountered photographer Ernst Haas in post-war Vienna, and brought his work to Trabant’s attention. Working together for Heute, Morath wrote articles to accompany Haas’ pictures. In 1949, Morath and Haas were invited by Robert Capa to join the newly-founded Magnum Photos in Paris, where she would work as an editor. Working with contact sheets sent into the Magnum office by founding member Henri Cartier-Bresson fascinated Morath. She wrote, “I think that in studying his way of photographing I learned how to photograph myself, before I ever took a camera into my hand.”

Morath was briefly married to the British journalist Lionel Birch and relocated to London in 1951. That same year, she began to photograph during a visit to Venice. “It was instantly clear to me that from now on I would be a photographer,” she wrote. “As I continued to photograph I became quite joyous. I knew that I could express the things I wanted to say by giving them form through my eyes.” Morath applied for an apprenticeship with Simon Guttman, who was at that time an editor for Picture Post and running the picture-agency Report. When Guttman demanded to know what Morath wanted to photograph, and why, she answered that “after the isolation of Nazism I felt I had found my language in photography.” After Morath had spent several months working as Guttman’s secretary, he finally set her to work. She sold her first photographs, of opening nights, exhibitions, inaugurations, etc., under the pseudonym Egni Tharom, her own name spelled backwards.

Morath divorced Birch and returned to Paris to pursue a career in photography. In 1953, Morath presented her first large picture story, on the Worker Priests of Paris, to Capa, and he invited her to join the agency as a photographer. Her first assignments for Magnum were stories that were of no interest to “the big boys.” One of her earliest assignments took her to London for a story about the inhabitants Soho and Mayfair. Morath’s portrait of Mrs. Evelyn Nash, from that assignment, is among her best known photographs. In 1953-54, at Capa’s suggestion, Morath worked with Cartier-Bresson as a researcher and assistant, and in 1955 she was invited to become a full member of Magnum Photos. During the late 1950s Morath traveled widely, covering stories in Europe, the Middle East, Africa, the United States, and South America for such publications as Holiday, Paris Match, and Vogue. Together with her friend, the French writer Dominique Aubier, she published Guerre à la Tristesse, photographs and writing about Spain, in 1955, followed by De la Perse à l’Iran, photographs of Iran, in 1958. Both books were edited and published by Robert Delpire. Morath published more than thirty monographs during her lifetime.

Like many Magnum members, Morath worked as a still photographer on numerous motion picture sets. Having met director John Huston while she was living in London, Morath worked on several of his films. Huston’s Moulin Rouge (1952) was one of Morath’s earliest assignments as a photographer, and her first time working in a film studio. When Morath confessed to Huston that she had only one roll of color film to work with and asked for his help, Huston obtained three more rolls for her, and occasionally waved to her to indicate the right moments to step in with her camera. Huston later wrote of Morath that she “is a high priestess of photography. She has the rare ability to penetrate beyond surfaces and reveal what makes her subject tick.”

In 1960, while photographing the making of The Unforgiven, starring Audrey Hepburn, Burt Lancaster, and Audie Murphy, Morath accompanied Huston and his friends duck hunting on a mountain lake outside Durango, Mexico. Photographing the excursion, Morath saw through her telephoto lens that Murphy and his companion had capsized their boat 350 feet from shore, and that Murphy, stunned, was near to drowning. A skilled swimmer, Morath stripped to her underwear and hauled the two men ashore by her bra strap while the hunt continued uninterrupted.

Morath worked again with Huston in 1960 on the set of The Misfits, a blockbuster film featuring Marilyn Monroe, Clark Gable, and Montgomery Clift, with a screenplay by Arthur Miller. Magnum Photos had been given exclusive rights to photograph the making of the movie, and Morath and Cartier-Bresson were the first of nine photographers to work on location, outside Reno, Nevada, during its filming. Morath met Miller while working on The Misfits, and – following Miller’s divorce from Monroe – they were married on February 17, 1962.

Morath’s achievements during her first decade of work as a photographer are significant. Along with Eve Arnold, she was among the first women members of Magnum Photos, which remains to this day a predominantly male organization. Many critics have written of the element of playful surrealism that characterizes Morath’s work from this period. Morath attributed this to the long conversations she had with Cartier-Bresson during their travels in Europe and the United States. Like many of her early Magnum colleagues, however, Morath’s work was motivated by a fundamental humanism, shaped as much by the experience of war as by its lingering shadow over post-war Europe. This motivation grows, in Morath’s mature work, into a motif as she documents the endurance of the human spirit under situations of extreme duress as well as its manifestations of ecstasy and joy.