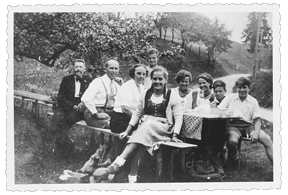 Ingeborg Mörath was born in Graz, Austria. Her parents were scientists whose work took them to different laboratories and universities in Europe during her childhood. Educated in French speaking schools, Morath and her family relocated to Darmstadt, a German intellectual center, in the 1930s, and then to Berlin, where Morath’s father directed a laboratory specializing in wood chemistry. Morath was registered at the Luisenschule near Bahnhof Friedrichstrasse.

Morath’s first encounter with avant-garde art was the Entartete Kunst (Degenerate Art) exhibition organized by the Nazi party in 1937, which sought to inflame public opinion against modern art. “I found a number of these paintings exciting and fell in love with Franz Marc’s Blue Horse,” Morath later wrote. “Only negative comments were allowed, and thus began a long period of keeping silent and concealing thoughts.”

War broke out in Germany in 1939. After finishing high school, Morath passed the Abitur and was obliged to complete six months of service for the Reichsarbeitsdienst (Reich Labour Service) before entering Berlin University. At university, Morath studied languages. She became fluent in French, English, and Romanian in addition to her native German (to these she later added Spanish, Italian, Russian, and Chinese). “I studied where I could find a quiet space, in the University and the Underground stations that served as air-raid shelters. I did not join the Studentenschaft (Student Organization).” Towards the end of the war, Morath was drafted for factory service in Tempelhof, alongside Ukrainian prisoners of war. During an attack on the factory by Russian bombers, she fled on foot to Austria. In later years, Morath refused to photograph war, preferring to work on stories that showed its consequences.