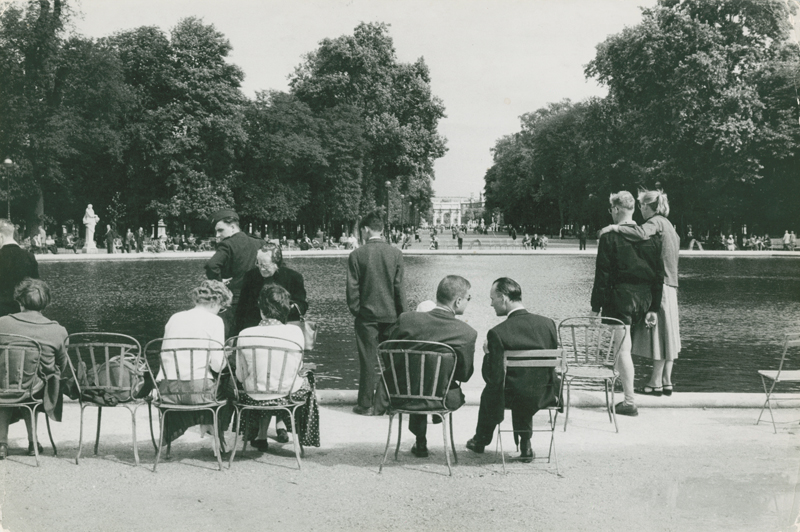 A primary focus of the IM Foundation has been to showcase stories and images that offer us an in depth look into Inge Morath’s photographic career. During the 1950’s, Inge worked on many stories that were commissioned by magazines and publications. She used each as an opportunity to build upon her extensive personal work when she travelled and completed these assignments.

Inge Morath: Paris, 1957 presents a selection of some of these photographs from her archive. One of her extensive essays, consisting of more than 50 contact sheets, was initially commissioned by French magazine“L’Oeil.” It is unknown if it was actually published. In this small selection of 25 images, we hope to highlight Inge’s exploratory nature and her curiosity to understand the unique city of Paris.

This selection of images consists scans from both Inge’s original contact sheets and her vintage prints. We can see Inge capturing details and scenes that are simple but also offer an informative view into this prominent European city. She carefully examines and explores the city, with its grand, intricate buildings. Her clever but beautifully composed photos of Parisians with their surroundings create a mood that is both playful and quaint. Her images are not a travelogue, but offer her own personal perspective of a city she is familiar with. This feeling of familiarity allows the viewer to travel back or exist in those moments, even today.

Inge also documents the daily life of Parisians, young and old. Her interest in architecture of Paris gives a grand voice to the inanimate. The intentional play between these historical structures and the people is undeniable. She wants to represent Paris as an individual, alive with history, beauty, and quirkiness. A city famously known to be one the most romantic in Europe has here also been translated into a one that is rich and vibrant with culture, arts, and nostalgia.