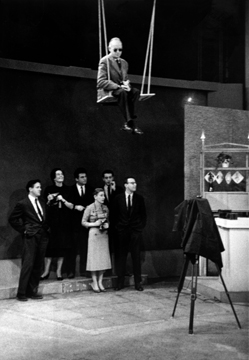 I have photographed since 1952 and worked with Magnum Photos since 1953, first out of Paris, later out of New York. I am usually labeled as a photojournalist, as are all members of Magnum. I am quoting Henri Cartier-Bresson’s explanation for this: He wrote to John Szarkowski in answer to an essay in which Szarkowski stated that Cartier-Bresson labels himself as a photojournalist.

“May I tell you the reason for this label? As well as the name of its inventor? It was Robert Capa. When I had my first show in the Museum of Modern Art in New York in 1948 he warned me: ‘watch out what label they put on you. If you become known as a surrealist […] then you will be considered precious and confidential. Just go on doing what you want to do anyway but call yourself a photojournalist, which puts you into direct contact with everything that is going on in the world.'”

It is in this understanding that we have been working as a group and yet everyone following their own way of seeing. The power of photography resides no doubt partly in the tenacity with which it pushes whoever gets seriously involved with it to contribute in an immeasurable number of forms his own vision to enrich the sensibility and perception of the world around him.

[In the 1950s] the burden of the already photographed was considerably less than now. There was little of the feeling of being a latecomer who has to overwhelm the huge existing body of the photographic oeuvre – which, in photography as in painting and literature, necessarily leads first to the adoption and then rejection of an elected model, until one’s own work is felt to be equal or superior, consequently original.

Cialis is currently manufactured by a bio-pharmaceutical company named as Eli Lilly and ICOS cooperation and it is also known as Tadalafil. Cialis pill has got its approval from the US Food and Drug Administration (FDA) association in November, 2003 36hr of Fun with Generic Cialis

Photography is a strange phenomenon. In spite of the use of that technical instrument, the camera, no two photographers, even if they were at the same place at the same time, come back with the same pictures. The personal vision is usually there from the beginning; result of a special chemistry of background and feelings, traditions and their rejection, of sensibility and voyeurism. You trust your eye and you cannot help but bare your soul. One’s vision finds of necessity the form suitable to express it.

Inge Morath, Life as a Photographer, 1999