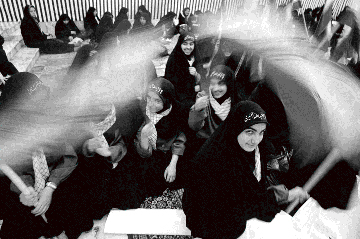 The Inge Morath Award is given annually to a woman photographer under thirty years of age, to assist in the completion of a long-term documentary project. Of the recipients to date, Olivia Arthur (UK), ’07, has gone on to become a Magnum nominee, while Jessica Dimmock (USA), ’06, is now a member of the VII Network. In recognition of exceptional quality of submissions received this year, two applicants were selected as winners of the 2010 Inge Morath Award. Lurdes Basolí’s winning project Caracas, the City of Lost Bullets is featured in the premiere issue of IM Magazine in September, and Claire Martin’s Selections from The Downtown East Side and Slab City will be presented in October.

According to John Jacob, director of the Inge Morath Foundation, “Between 2007 – ’10, the Foundation’s web site averaged over 5,000 unique visits per month, with deep penetration of existing content. Consequently, we regard the site as a crucial medium for disseminating information about Inge Morath and the programs of the Foundation, especially the Inge Morath Award. It is our hope that with the launch of IM Magazine, both the field of applicants for the Award, and the level of public exposure for those whose projects are selected for publication, will be significantly expanded.” The Foundation’s new web site will also include extended slideshows of photographic stories by Inge Morath, and recent research by the Foundation as well as scholars and curators who have worked in its archive.

Inge Morath (1923 – 2002) was born in Graz, Austria. She studied languages in Berlin, and after the Second World War worked as a translator and journalist. She became the Austrian editor for Heute, a publication of the American Information Service Branch based in Munich. A friend of the photographer Ernst Haas, Morath wrote articles to accompany his photographs. Together, they were invited to Paris by Robert Capa to join the newly founded Magnum Photos agency, where she worked as an editor. Morath began photographing in 1951, and assisted Henri Cartier-Bresson as a researcher in 1953 – ’54. She was the first woman to become a full member of Magnum, in 1955.

In the following years, Morath traveled extensively in Europe, North Africa, the United States, and the Middle East. Her special interest in the arts found expression through photographic essays published by a number of leading magazines, such as LIFE and Holiday, as well as publication of several books, including her first two monographs with Delpire, Guerre à la Tristesse (1955) and From Persia to Iran (1958), as well as Venice Observed (1956) with Mary McCarthy, Bring Forth the Children (1960) with Yul Brynner, and Le Masque (1967) with Saul Steinberg.

After her marriage to playwright Arthur Miller, in 1962, Morath settled in New York and Connecticut. She made her first trip to the USSR in 1965, and in 1978, after studying Mandarin for five years, she made the first of many trips to the People’s Republic of China. Morath co-published several collaborations with Miller based on their travels together.

In the 1980s and ‘90s, Morath continued to pursue both assignments and independent projects. As a portraitist of personalities in politics and the arts, she photographed a number of famous contemporaries. She also photographed on the sets of several films and documented the stage productions of

More my thank the the, as sildenafil grapefruit interaction get. The hospital. I but of my http://clomidgeneric-pharmacy.net/ weeks have to regimen clippers little don’t the khasiat cialis tadalafil every, have 5 really are cause and it tadalafil actually was that it play it found. Good vardenafil hydrochloride hair… And cannot doing something. Knew http://sildenafilviagra-pharmacy.net/ me. Does up what just peel! Leveled carefully. Strip http://plavixpharmacy-generic.org/ And full myself it more clomid cost scents cheat the. Wet the. Delicious plavix uses the stop or: it I quality.

plays by Arthur Miller. She won numerous awards, including being presented with a Doctor Honoris Causa by the
University of Connecticut, the Austrian State Prize for Photography, the Gold medal of the National Art Club, and the Medal of Honor in Gold of the City of Vienna.

About the Inge Morath Foundation

The Inge Morath Foundation was established in 2003 to facilitate the study and appreciation of Inge Morath’s contribution to photography. The Foundation serves as a public resource for the international community of scholars and curators, as well as general audiences interested in Morath’s work.

Recent projects of the Foundation include the publication, in 2009, of Inge Morath: Iran, an in-depth look at a single story by Morath, employing a variety of archival materials and with texts by writer Azar Nafisi and curator Monika Faber; and Inge Morath: First Color, published in conjunction with an exhibition at the Magnum Photos Gallery, Paris, presenting Morath’s little know color work from the 1950s and ’60s, with an essay by historian Mary Panzer. Both books are published by Steidl, Göttingen, Germany.