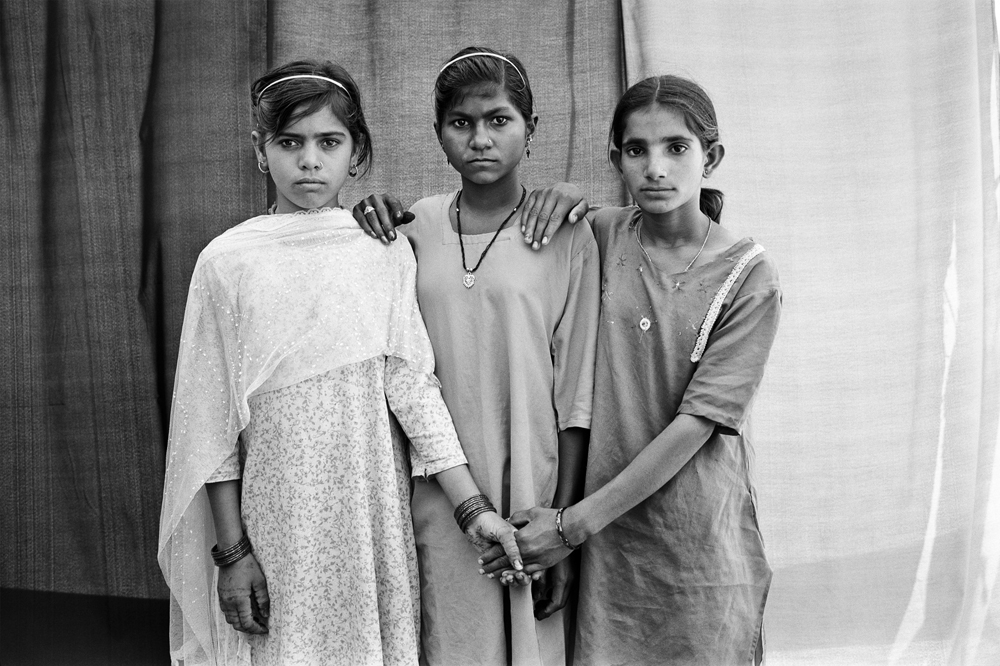 I have photographed in rural Rajasthan for twelve years now, in villages, homes and families that treated me as their own. Although I chose to work independently, over the years I developed a relationship with various NGOs (non governmental organisations), including Urmul Setu Sansthan, in Lunkaransar. They have a bare bones campus in what used to be a one-camel town, albeit one with a busy National Highway running through it: simple, white blocks laid out in sandy soil, one of them a guest house that I knew I could stay in whenever I passed through, and where I was asked to pay whatever I could afford at the particular time. The stark setting placed into relief the various individuals inhabiting the campus, drawn there either by a greater motivation or personal circumstance. We were all fugitives from the world at large, for varying lengths of time, along with our dreams and accompanying disenchantments; ideas, plans and schemes were constantly afoot. The overarching utopian idea at Urmul remained Gram Sewa, or ‘in the service of the village’.

As part of their various programs, Urmul would organize Balika Shivers, or camps for girls, where in the course of six months, girls who had never before attended school would be brought up to the level of a class five student. Somewhat related to the Shivirs, every few years they also organised a Balika Mela, or ‘fair for girls’, attended by about fifteen hundred adolescent girls from seventy odd surrounding villages. The Mela had various stalls, food, performances, a Ferris wheel, magicians, puppet shows, games and competitions, similar to any other small town mela. In 2003 I was invited to one, to do something with photography.

I decided to create a photo-stall for anyone to come in and have their portrait taken, and later buy the silver gelatin print at a subsidised rate if they wished. I had a few basic props and backdrops – whatever we could get from the local town studio and cloth shop on a very limited budget – but it was fairly minimal, and since it can get windy out in the desert everything would keep getting blown around, or periodically struck down. The light was the broad, even light of a desert sky, filtered through the cloth roof of our tent. Many of the more striking props – like the peacock and the paper hats – were brought in by the girls themselves. Girls came in, and decided how and with whom they would like to be photographed – best friends, new friends, sisters, the odd younger brother who had tagged along, girls with their teachers, their whole class, the local girl scouts. Some of those who posed for the pictures went on to learn photography in the workshops that we started in May of that year, and two years later they documented the fair themselves. Incredibly, one of them, Manju, even started a photo studio than ran successfully for a while in Village Kaalu. Her father was a member of Urmul, and therefore exceptionally forward thinking, but she may still have been one of the first to do so in the region, ever.

In 2010, a Balika Mela was held after a fairly long gap. Smaller in scale, it was called Balika Milan this time, and I was invited to participate once again. I decided to show the earlier Balika Mela pictures in a tent at the fair. Many of the girls who wandered in were surprised to recognize themselves or their friends. We found ourselves different, but also the same. Some of the girls were mothers now, others were teachers. I hadn’t quite planned to but spontaneously ended up making more portraits, this time in color. Whereas the earlier pictures were perhaps more about relationships and mysterious, improvised gestures that may constitute a small theater of the vernacular – possible references include those drawn from religious calendars, Bollywood posters or local photo studios – the later color portraits are also about the incredible and unique fashion on display. In our cities everything is increasingly branded and starting to look fairly homogenous. But here I found hearts stitched onto shirts, leather jackets over salwar kameezes, scarves instead of dupattas, hand knitted sweaters, hand embroidered jeans – a quite distinctive style. What remains common to both sets of pictures is a sense of sureness in the sitters.

Unexpectedly, that sense of self exists in a particular adult context. Almost every morning when I would open the local Hindi newspaper in Bikaner or Barmer, I would find that a woman somewhere had jumped into a tanka, fallen into a well, slipped into a water reservoir, drunk poison, hung herself from the khejri tree. Sometimes it was a cooking incident involving kerosene. It was usually labeled an accident, often unsolved, frequently the woman was said to be ‘mentally unsound’. One year when I went to visit a friend who had cerebral malaria in the Barmer government hospital, I met a girl with over eighty per cent burns. Her name was Looni. She told me her in-laws had set fire to her, but she could not bear testimony against them because her father-in-law was a constable, and she was scared that if she died her husband and influential in-laws would not then take care of her children. She did manage to get to a larger, better equipped hospital in Jodhpur for further treatment but ended up dying there some days later. When I spoke to the warden at the Barmer hospital, in the burns ward, he showed me pages from his register; there was a steady stream of women coming in every month.

I revisited the hospital and other sub-centers, attempted to follow particular cases, met the police and discussed what I found with local activists. I also realized how complicated each case was, particularly in a culture where there was such a pervading sense of fear, and a real hesitation to speak out publicly. I wish I could say that things have changed in the last decade, but I continue to read alarming reports in the local papers. Interestingly, all the girls mentioned in the newspaper are usually married, and prominently labeled as such.

In such a climate for a girl to leave her village to attend a Balika Mela, to be allowed or supported by her parents to do so, to then step in front of a camera in a tent with stray bystanders looking on, to not only do so but to say this is who I am and how I am, that spirit is what I hoped to record in the photographs. Urma and Halima, two Jogi girls who belong to a nomadic community with few rights, one that may almost be said to exist outside society as we know it, who have no land or jobs but must find a way to exist precariously on the fringes of villages and small towns, with no access to schools or healthcare or the law, and who must therefore make a living off chameleons or snakes or whatever they may find in the wilderness and that no-one else would wish to claim; Urma and Halima came into the tent and sat down very straight on the white plastic chair and the black stool, flanking the fake flower arrangement on its gleaming stand. They did so with supreme confidence, not unlike the Maharanis of a hundred years ago. This book is for them, and for that.

Preface to the book, Balika Mela, with the full set of black and white and color photographs, forthcoming in 2011/2012 from Edition Patrick Frey. Gill is also a nominee for The Grange Prize 2011.