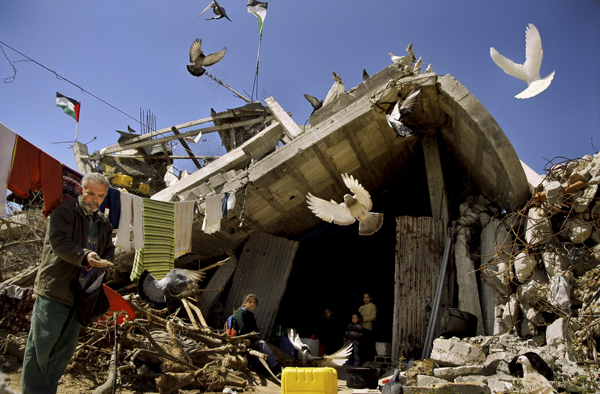 Between the shattered memories of the past and the unknown misty future lie the piles of remains that used to be called “Home” by Mohammed Khader and his wife, Ebtesam, and their 22 family members. This is where they take shelter, in the ruins of a house that was targeted during the Israeli War on the Gaza Strip during 2008 – 09. Khader’s family lived for the past 12 months beneath the rubble, without electricity or supplies, relying on humanitarian aid from international and local organizations.

Not much different from dozens of other families who became homeless after the War ended, with no place to go but camping near their destroyed houses. Showing the different angles of the aftermath in Gaza, the various situations and people; showing the symptoms of the mental aftermath in both tragically and unexpectedly hopeful reactions.

The remarkable feature of Khader’s family is the distinct relationship they have with their pigeons. Although may of them suffered and many died, no matter where Mohammed Khader and his kids would go, the pigeons would follow. Mohammed used to take care of his pigeons, and the war didn’t change that a lot. Both are seeking some kind of comfort after nothing else is left but the company of the other.

This reportage documents the extent and nature of the aftermath of War in routine, daily life, as it effects women, kids, and men today in the Gaza Strip, who have faced in the relatively recent past – are continuing to face – the dangers of terror and war. I would like to examine both the immediate and long-term effects of this aftermath, as well as ways in which those hurt by it may begin the healing process. I would focus on the physical and emotional effects; particularly the mental side would surely be included.

4 thoughts on “Eman Mohammed: What Lies Beneath the Rubble”