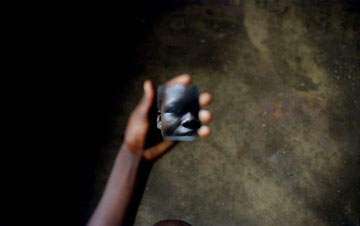 “Wife of God” is about a controversial practice of African traditional religion, known as Trokosi, amongst the Ewe people in Ghana, Togo, and Benin. Ewe families suffering misfortunes bring females to shrines to reconcile with a god who is angry because of a crime committed by an ancestor. The females, often young virgins, live at the shrine and “marry” the deity to atone for the crime and appease the angry god. The women and girls are called fiashidi, which in the Ewe language means “wife of god.” Christian based organizations, internationally and in Ghana, say the fiashidi are slaves.

They claim that thousands of females are forced into servitude,sex and marriage to the priests. They publicize this practice in attempts to raise money to purchase the freedom of the women and girls and convert them to Christianity. The traditionalists consider the fiashidi queens and believe the “human rights” campaign is a ploy to eradicate African traditional religion. They claim that there are no human rights violations and the women are free to do and go as they please. This story brings to light a growing Evangelical Christian movement and the decline of traditional religion throughout Africa. Ghana is 63% Christian, 16% Muslim and 21% African traditional religion.

My photographs illustrate the daily lives of the Ewe people as well as the religious life in the Trokosi shrines. My pictures put a face to a culture and people who are misunderstood and often targeted for their different beliefs and practices. Showing the lives of these women enhances our knowledge of traditional religious practices and documents and endangered and misunderstood culture. Bio: 2006 National Geogaphic Magazine Internship 2005 Atlanta Photojournalism Contest 2nd place Portrait 2005 Society of Newspaper and Design Award of Excellence 2005 Ohio University Student Enhancement Award “Wife of God: Faishidi in Ghana” 2005 Ohio University Graduate Student Senate Grant for Original Work: “The Revival of Burlesque” 2004 cPOY Gold: Pictorial: Honorable Mention 2003 POYi Member of team awardd best editing in papers under 75,000 2003 NPPA Women in Photojournalism, Juried Exhibition, NC.