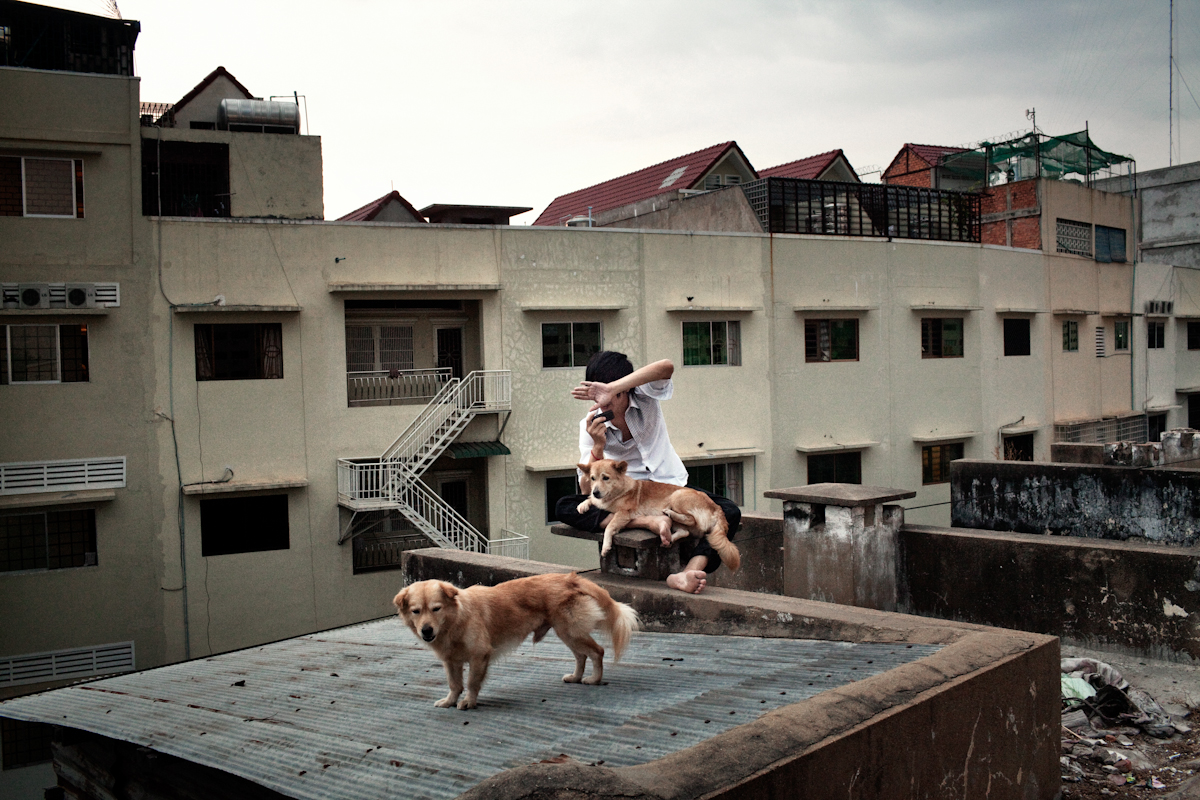 Families and businessmen, elderly and children, drug addicts and poets, all live in the same building, a unique microcosm of Cambodian society. The White Building mirrors Phnom Penh’s hidden soul. It throbs and hums like a hodgepodge construction, but carries a distinct flavor left since its construction in 1963, when it was supposed to host the athletes of the Southeast Asian Peninsular Games. Now a mixture between a slum and a sanctuary, its residents include poets and illiterates, newly-weds and mistresses. As sunlight shines through window slits and shadows are cast on its white walls, the people within learn to tell time. Life in the White Building remains a distinctly Cambodian narrative, plastered by graffiti and stories that reach into memories and dreams.

In the 1960s Cambodia saw a renaissance in architecture and the arts. Phnom Penh flourished. Amidst a positive outlook on the potential for a bright future, one of history’s darkest chapters was about to begin. The Khmer Rouge regime took power in 1970. Cambodia changed forever. During the following years, the country saw its colors fade. Eyes lost shimmer.

Intellectuals and artists found their hands bound and mouths gagged. It is believed that 1.7 million people died during the Khmer Rouge regime. Many have been tortured, thousands starved to death. Years of violence and imprisonment shaped minds, leaving a legacy of collective shock. After the fall of the regime in 1975, there was no government plan to deal with the psychological consequences of collective violence. In the uncertain post-conflict environment the White Building survived and became a place for many to restart their lives from. It offered protection in its offal, and its rooms were slowly repopulated. Every Cambodian is a war witness. However, the acts committed by the Khmer Rouge remain a taboo topic in Cambodia. In the White Building there is no need to verbalize history to see that it shapes the residents’ present.

Today, the building hosts over two thousand people of all ages and from all walks of life. This patchwork of characters chooses silence as strategy to cope with their past. Many memories are petrified within the White Building, untold and unshared. The stories the Building contains are an incredible resource, a unique and irreplaceable archive of Cambodia’s past and present, and a chance to raise awareness and allow understanding. To this day, Cambodian citizens struggle to break free from their indelible trauma – the White Building is a symbol of hope. Collection of the remains of this piece of history is urgent. The destruction of the Building by the Cambodian government is imminent. The friction brought upon the inhabitants by the prospect of losing their homes, the weight of memories and their meaning are what I seek to document through photography and interviews. I plan to explore the White Building’s inner space and immerse myself in its entanglement of identities. The older generation rarely shares stories, and Cambodians are born with a blind spot that hides core elements of their past.

Underestimating the social aftermath of the Khmer Rouge’s genocide is a threat to the collective healing process. Institutional justice covers only one part of the compensation for loss. The other share is to be found at the grassroots level. I aim at redirecting the older generation’s experience to their youth and descendants, adding a chance to learn about past mistakes. The project I plan to complete in the White Building will record human interactions, social understanding of justice and unpublished testimonies, which will all lead to a deeper understanding of Cambodia’s conflicted history.