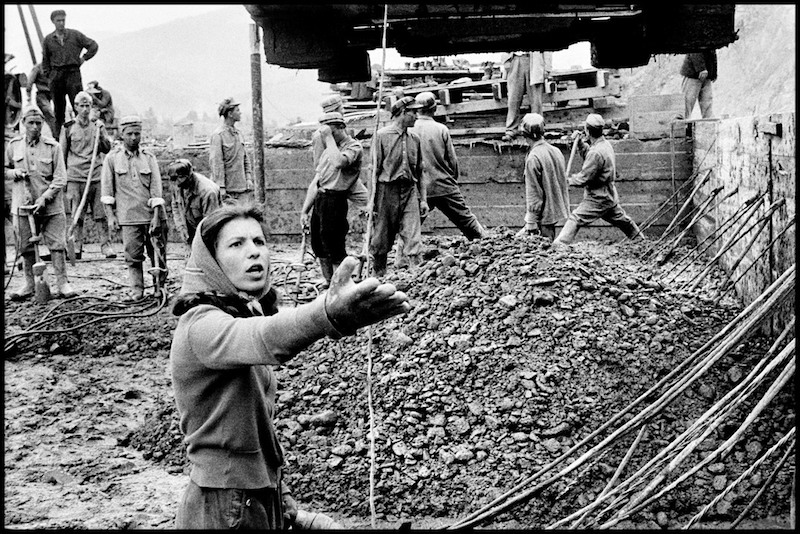 Inge Morath’s dream of traveling the length of the Danube River, begun in 1958, was not realized until 1995. In 1958, six of the nations bordering the river were led by Communist governments which placed severe limitations on Western photojournalists. As she later wrote, “Either one was refused a visa right away, or one got one only good for transit, or for a stay of one to three days but with restrictions as to the places one could visit.” Morath was denied even a transit visa to Hungary. To her surprise, however, she received permission to travel and photograph in Romania twice during 1958.

As a university student, Morath had studied the Romanian language. “I spent a semester in Bucharest to further my studies, earning money by giving German lessons and translating Rumanian poetry and short stories into German, thus starting an acquaintance with the rich literature of the peoples living in the countries bordering the eastern part of the Danube.” Of her many visits to the Danube region in the late 1950s, Morath’s work in Romania was by far the most extensive and analytical.

Traveling by car with an appointed guide/translator, Morath was able to criss-cross the rugged Romanian countryside in order to work in remote villages as well as major urban centers. While her status as an official visitor provided her with the opportunity to visit factories and hospitals, Morath’s facility with the language and familiarity with Romanian culture resulted in her being invited into private homes, onto fishing boats, and to a variety of public and private festivities.

Inge Morath: Romanian Journal is organized by the Inge Morath Foundation, New York, and the Galerie Fotohof, Salzburg, Austria. The exhibition presents a selection of 130 black and white photographs accompanied by journal entries describing Morath’s journey. For further information about the exhibition please contact Emma Winter at the IM Foundation or Kurt Kaindl at Fotohof.