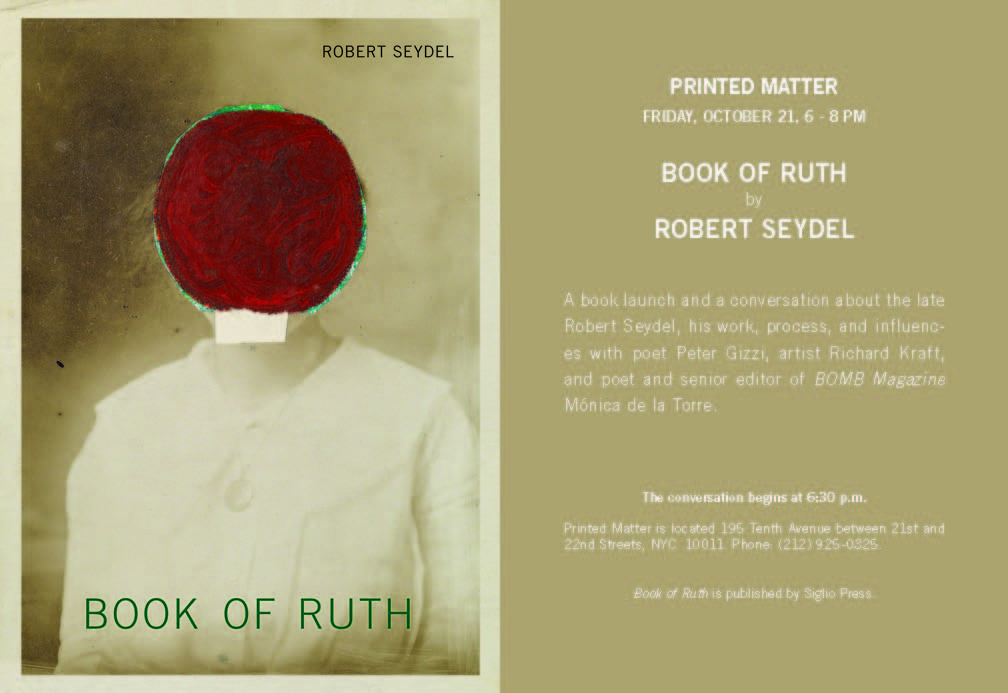 Please join us in attending a book launch and a conversation about the late Robert Seydel, his work, process, and influences with poet Peter Gizzi, artist Richard Kraft, and poet and senior editor of BOMB Magazine Mónica de la Torre.

Published just months after Robert Seydel’s unexpected and sudden death, Book of Ruth is a debut book that cannot be contained in any single category. A first person narrative of sorts, it uses collages, drawings, and journal entries to create an intimate portrait of an unknown woman for whom the distances between the ordinary and extraordinary, the ecstatic and the desolate, loneliness and embrace is infra-thin. The detritus from which Seydel fashions Ruth’s art and narrates her inner life shine like the pages of an illuminated manuscript, revealing as much about the imagination of an artist as about the tenuous creation of self.

A visionary work by an artist and writer who himself was reclusive and uncompromising, Book of Ruth is the only published work by Seydel who had a single solo show in New York before his untimely death. This evening’s conversation—led by the editor who brought the centerpiece text “Flowers & Formulas” to the pages of BOMB Magazine—will open the door to Seydel’s work, shining light on his process and influences, as well as delving into the inimitable combination of playfulness, erudition, and imagination that drives his work.

ROBERT SEYDEL was an artist, writer, curator, and teacher. Editor of Several Gravities by Keith Waldrop (Siglio, 2009) as well as a professor at Hampshire College in Amherst, MA, Seydel created, often using various personas, several large-scale series of works (many in small formats) as well as curated over twenty exhibitions before his death in January, 2011.

Book of Ruth is published by Siglio Press.