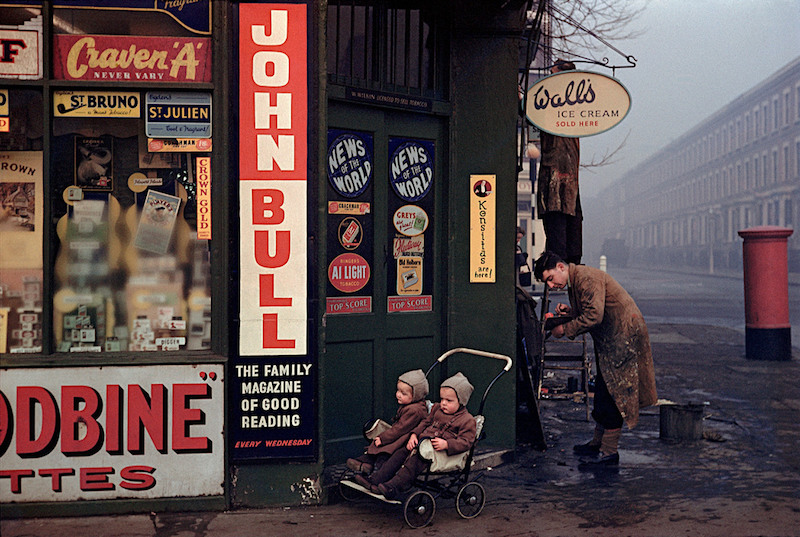 When you think of photojournalism from long ago, do you immediately think in colour or black & white? Perhaps Robert Capa’s heroic war images or W Eugene Smith’s photo essays spring to mind. Yet while photojournalists of the 1950s and ’60s were capturing events in black & white, they were also documenting life in colour.

Determined to get to the bottom of the mystery surrounding Inge’s displaced colour photography, John Jacob, curator at the Inge Morath Foundation, set out to track down her ‘lost’ colour images in 2007. The result is the recently published book First Color, featuring a selection of Inge’s colour work. While not intended to be a complete record of her colour work – an almost impossible task, says John – the book sheds light on Inge’s working methods and provides a fascinating historical look at colour photojournalism.

Recovering the images was a mammoth task that involved searching through thousands of colour slides from the Magnum archives. At Magnum, colour transparencies were stored in a different way to black & white negatives. While the black & white negs were carefully marked with the photographer’s name and photo story to preserve the integrity of the photographer, the colour slides were simply filed under ‘themes’ and fell into stock. Some 15,000 of Inge’s colour images were separated from their original picture stories and ‘lost’ in the system in this way.

‘When we started this project, there was no means of accessing the colour images to get this material back,’ says John. ‘No index system existed. To identify all Inge’s images stored by Magnum would require staff to remember what had been filed where and these people have moved on. We may never know the full scope of the colour archive.’

Faced with such a daunting task, John and his team limited themselves to searching only the 1950s and ’60s archives. Realising the way the colour images had been stored would make it difficult to locate and piece together the photo stories in their entirety, their aim was to retrieve as many images as they could and retrace – as far as possible – Inge’s movements as a colour photographer during this period.

‘We had to find a way to put the images together that would reflect the way Inge worked,’ says John, ‘so we decided to order the images chronologically and use the places she’d visited as the basis for the book.’

Before joining Magnum in the early 1950s, Inge worked with Ernst Haas as a researcher and editor on picture stories for magazines such as Life. She assisted Henri Cartier-Bresson and travelled all over the world photographing the people and places she encountered. After the 1960s, Inge pursued more personal projects with her husband, the playwright Arthur Miller, continuing to shoot in both black & white and colour.

‘During the 1950s and ’60s, Inge was sent on many assignments’ says John. ‘One of her first assignments was in Spain, a country she returned to several times. She travelled there with Cartier-Bresson in 1953 to photograph Picasso for Holiday magazine and formed a close friendship with him. Inge did a lot of research before each trip, but looking at her work there is no agenda. She would enter the culture of a place and into the lives of the people – her subject was people.’

Jinx Rodger, widow of founding Magnum member George Rodger, knew Inge well and worked with her in Paris in the early 1950s. ‘Inge was a busy lady and travelled a lot,’ she says. ‘She was very bubbly and enthusiastic. People warmed to her. When she was an assistant, I remember her saying how she wanted to do something on her own, away from other photographers.’

For many photographers of that period, the advent of colour film was met with scepticism and even distrust. ‘There was a wider cultural prejudice towards colour,’ says John. ‘Colour film was new and people didn’t trust it – many photographers felt they didn’t know the film the way they knew black & white. There was a lack of confidence – not in their abilities, but in the actual film as a medium.’

Magazines may have wanted colour images, but colour was not seen as an art form, as Jinx remembers. ‘The idea of photography being “art” is a much more recent concept,’ she says. ‘The purpose of photography was to document, to show the world what the world was about. It was expensive to make a good colour print and while Inge loved using colour, like other photographers of the period she wasn’t overly concerned about making colour prints’.

Capa encouraged Magnum photographers to shoot in colour to meet the demand from magazines, but there was a sense, both within and outside of Magnum, that colour was inferior or less important than black & white. ‘It’s often the case that what’s popular is what’s scorned,’ says John. ‘But whatever prejudices may have existed, the photographers didn’t pay any less attention to colour – they were professional. They didn’t suddenly become any less competent because they were working in colour.’

One photographer who was reluctant to embrace colour film was Henri Cartier-Bresson. As Inge knew him well, did the fact that she was working closely with him influence her opinion of colour?

‘Inge and Henri must have spoken about photography, but I don’t think they would have discussed colour film specifically,’ says John. ‘Henri’s opinions on colour photography had an impact on all the photographers at Magnum. He had a passion for surrealism, and both he and Inge were interested in the world and how art and photography fitted into it. That is most likely how they influenced each other.’

After initially using a single Leica camera, Inge switched to two cameras – one for colour and the other for black & white. ‘Like most photojournalists, she wanted to work quickly,’ says John. ‘It wasn’t practical to keep switching films every time she saw something she wanted to shoot in colour.’

Inge, also an avid writer, contemplated the two different ways of working. ‘If I had to do colour and black & white simultaneously,’ she wrote, ‘I would finish one and then do the other trying not to think of both at the same time. The thinking is so different!’

Jinx echoes these sentiments. ‘Certainly, photographers approach shooting in colour differently to black & white,’ she says. ‘But Inge had an extremely open mind towards photography. The medium she chose depended on how she saw the scene at the time. She looked at the subject and decided which would be the best way to show it.

‘Inge worked hard technically and really studied the properties of colour. If you have that sort of eye and imagination, you know whether a scene demands colour or black & white.’

John doesn’t believe Inge preferred one medium to the other. ‘The people I spoke with who knew her – for example, Jimmy Fox, who was picture editor at Magnum’s Paris office for many years – said she was just as active and enthusiastic about colour as she was about black & white,’ he says. ‘Inge was committed to photography in all its capacities.’

‘When I look at her work, I see a great storyteller,’ says John. ‘Inge wrote about everything she photographed and I see a strong narrative impulse in her. I think she had a great sense of humour – she saw things in the world that were unusual, funny or contradictory, which could be pulled out and framed by photography.’

Inge may never have set out to create abstract images, but there are slight elements of surrealism in some of her work. In the image ‘Reno, Nevada, USA, 1960’ (see page 25), a woman is pictured driving, framed by another car in the foreground. This ‘frame within the frame’ technique gives the photograph a graphic appearance and causes the viewer to feel as though they are present in the scene, looking through the window as the photographer presses the shutter. Ernst Haas, with whom Inge worked closely, was known for his abstract compositions. Could he have influenced her in some way?

‘Inge was, to some extent, influenced by Ernst and his experiments in colour, but she didn’t work in an abstract way like he did,’ says Jinx. ‘I think she felt if you photographed in colour you could faithfully show how the scene looked at the time. She worked hard to make sure the colours were genuine.’

Founding Magnum photographer Robert Capa is reported to have said that the first rule was ‘lots of colour where colour is’ and Inge herself believed ‘colour has to be there’ to photograph it. ‘Inge used colour very skilfully,’ says John. ‘In her early images she sought out colourful subjects in the urban landscape. By the later images – those taken on her trips to Iran, for example – colour became an intrinsic part of the scene, integrated into her entire photographic process.’

One especially striking image is ‘Market, Mexico, 1959’. In the background, brightly coloured scarves cascade over one another while silhouetted figures shuffle inconspicuously past in the foreground. These shadowy figures cut such a dramatic shape against the colourful backdrop that it is impossible not to question whether the composition would have had the same impact if it had been taken in black & white. ‘To me this picture is entirely about the colour,’ says John. ‘Many of Inge’s other pictures use colour to relay a narrative, but this picture is based so heavily on form and colour it becomes the story in itself.’

One thing is clear: if the Foundation is to continue to piece together Inge’s photographic legacy, there is more work to be done. ‘We have only scratched the surface,’ says John. ‘There must be thousands more images we have yet to uncover. The ultimate aim is to reintegrate Inge’s colour images with the black & white to piece together how she worked on a single story using both black & white and colour film.’

John would like to see more research carried out into colour photojournalism during this period as a whole. ‘The book, I hope, takes us closer to understanding this important period of photographic history,’ he says. ‘I feel we have opened the floodgates to this discussion.’