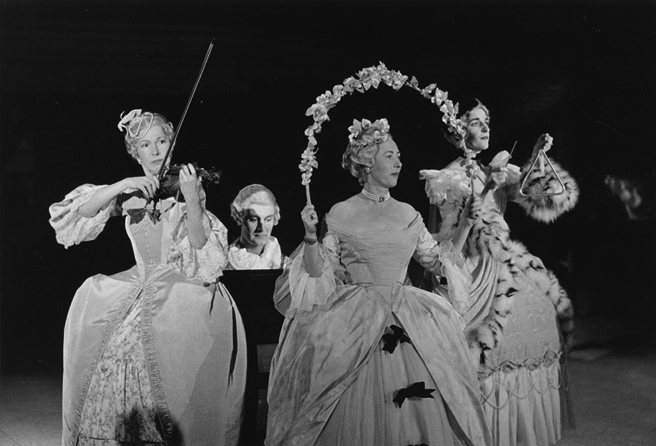 The Paris social season opened with a big, elegant splash last Tuesday. The Baronne de Gabrol, President of ESSOR, an association for the protection of France’s abandoned children, sponsored the Winter Ball, at which some of the most distinguished names in Europe amused themselves for the benefit of needy children.

So begins Inge Morath’s description of the Bal d’Hiver, a dance on ice performed by European royalty, in costumes donated by couturiers including Hubert de Givenchy and Christian Dior, and attended by an international roster of celebrities, from the Countess d’Paris to film star Charlie Chaplin. Photographed by Morath in 1955, this exquisite story of Parisian society has remained unpublished until now. The IM Foundation is pleased to announce that a selection of twenty photographs from the story, along with facsimile reproductions of Morath’s texts for Magnum Photos and a drop-out contact sheet, will appear in the forthcoming issue of Esopus magazine.

Esopus 17, will appear on newsstands in November, featuring artists’ projects by Acconci Studios, Alyson Shotz, and Adam Chodzko; the latest installments of “Modern Artifacts,” co-presented with the museum of Modern Art Archives, and “Guarded Opinions” (commentary by museum guards on the art they oversee); as well as new fiction, poetry, and 100 frames from Sergey Dvortsevoy’s “Tulpan,” introduced by fiction writer Jim Shepard. The issue also includes a CD of 13 new songs inspired by Esopus readers’ irrational fears.