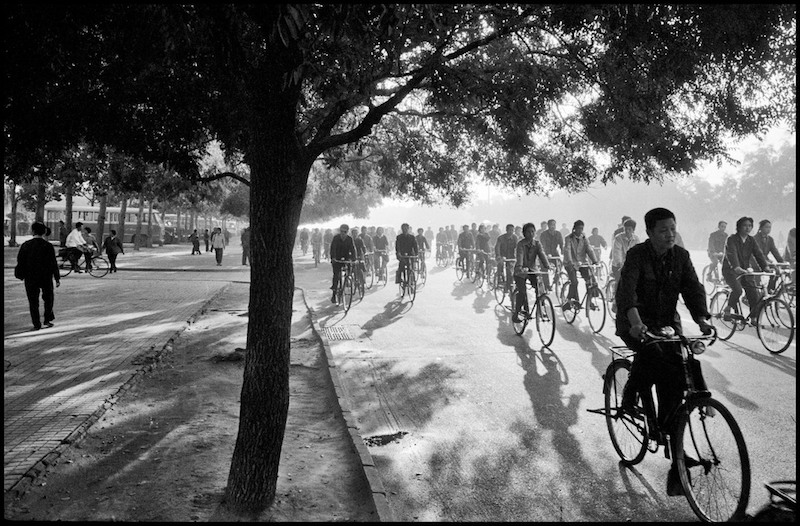 There is an underlying thread that runs through Inge Morath’s work, which is most clearly articulated in her larger projects. Having witnessed as a young woman the devastation of the Second World War, as an adult Morath experienced its impact over time and across geographical, political, and economic borders. In her photographs of Spain, Russia, and China, for example, made over a span of many years, she documented the evidence of ongoing clashes between tradition and modernity. Rather than photographing conflicts, however, Morath focused on the ways in which, even under the most oppressive circumstances, the human creative spirit finds expression: through social and religious rituals, posturing and costuming, through work, sport, and through dance, music, art, and theater. The thread that runs through Morath’s life–and through her life’s work in photography–is an affirmation that the human spirit endures through such creative self-expression. A linguist first and only later a photographer, Morath wrote that in the years following the Second World War, during which time she moved from Austria to France, then to England and, finally, back to France, she was “without a voice.” Ashamed to use her mother tongue, as Arthur Miller has noted, Morath “found herself in a defensive position in London and Paris.” “I often found myself silently observing rather than talking,” Morath wrote. Thus, in spite of her linguistic training, it was not until she became a photographer that Morath found the means to truly express herself. “It was instantly clear to me that… I finally had found my language,” she wrote of the experience of making her first pictures in 1952. “As I continued to photograph… I knew that I could express the things that I wanted to say by giving them form through my eyes.” Though photography remained the primary means through which Morath continued to express herself, it was but one of many languages in a toolkit to which she continued to add throughout her lifetime. As a photojournalist, Morath’s facility with languages diminished the degree to which she was regarded as an outsider by her subjects, granting her access to places where strangers might not otherwise be welcome. This is a key difference between Morath and those of her contemporaries who preferred to keep an “objective” distance from their subjects. Morath’s pictures are more directly a reflection of her experience of the world than they are neutral documents of it. As former Magnum director Chris Boot has written of Morath’s photographs, “the presentation of relationships takes the place of story structure, and her work is best understood as an ongoing series of observations about the life she made for herself.” It was a life lived on a grand scale. For Morath, who came to Magnum Photos in 1949 as a researcher and joined as a photographer in 1953-’54, the opportunity to travel and work in distant lands was crucial. She toured Europe in the early 1950s with Henri Cartier-Bresson, for whom she worked as an assistant, then traveled alone to Spain in 1954, South Africa in 1955, and the Middle East in 1956. In 1958, she followed the Danube from source to end, then journeyed through Tunisia, the United States, and Mexico in the early 1960s. Morath preferred to work in “countries whose influence extends beyond their borders; ‘mother cultures,” and she dreamed of traveling the Silk Road, from Europe through Persia to China.

“Before I start a project I like to look into its background,” Morath wrote. “I belong to the school of photographers who like to prepare themselves thoroughly for a trip to a new country.” In addition to its language, Morath studied the art and literature of each country that she visited in order to encounter its culture fully. Already fluent in French, Spanish, German, English, and Romanian, in the 1960s Morath studied Russian and, together with Miller, traveled to the USSR. Then, in the early ‘70s, in anticipation of the eventual fulfillment of her dream of traveling to China, Morath enrolled in the Berlitz School of Languages to learn Mandarin Chinese. She would continue her studies of Chinese language and culture for the remainder of her life, noting more than once the pleasantly soporific effect that Chinese grammar had on her. In many respects, Morath’s photographs and the writings of Arthur Miller are two sides of the same coin. For Americans of Miller’s generation, as he noted in his autobiography Timebends, “Europe was the place where the thinking was going on, or so you tended to imagine.” For Europeans of Morath’s generation, by comparison, “America was the despair and secret hope of… intellectuals.” Miller had traveled to Europe in the late 1940s, soon after the end of the Second World War, but generally preferred to remain close to home and to his work. Morath first encountered Miller in 1960, on the set of The Misfits in Reno, Nevada. Miller had written the screenplay, and Morath was one of a team of Magnum photographers hired to document its filming. She was, by comparison with Miller, the worldlier of the two, and after they were married, in 1962, Morath and Miller traveled frequently together and collaborated on four books combining his words with her photographs. Reflecting on the importance of Morath’s linguistic gifts to their shared projects, Miller wrote that to “travel with her was a privilege because [alone] I would never have been able to penetrate that way.”

In the late ‘70s, Morath and Miller were invited by the Chinese People’s Association for Friendship with Foreign Countries to travel within China, and they made the first of several journeys in 1978 (Morath returned alone in 1979, and again with Miller, for the staging of Death of a Salesman in Beijing, in 1983). Morath’s journals reflect the depth of her experience of Chinese culture. They also reveal her recurrent frustration with the camera’s limited ability to capture the nuances of light and life in China. The frequent surprised, staring faces that distinguish her photographs of China confirm the difficulty that her journals describe for a foreign photographer to go unnoticed by her subjects in a nation where, only a short time before, the presence of foreigners was limited and communication with them restricted. China was one of the few countries to which she traveled where, in spite of her fluency in Mandarin, Morath remained an outsider. Morath’s journals complain bitterly of her inability to blend in, and thus empathically to comprehend. Describing Inge Morath at work, her friend and collaborator Olga Carlisle wrote that she charmed her subjects like a snake charmer hypnotizes cobras, sometimes performing an almost ritualistic dance to draw them out. Morath described her working method similarly. Photographing the streets of San Fermin, Spain, as the town celebrated its annual Running of the Bulls in 1954, Morath described her total immersion into the noise and chaos of the festival. “There is no more stopping,” she wrote. “I have to dance too, I can’t help it. I dance with my cameras in front of the people and behind them and they laugh and let me work.” “Her involvement with her subject is total,” Carlisle wrote. “It is as if she was becoming the other person, the landscape, the still life.” In China, however, Morath’s and Miller’s movements were limited to what policy and the interests of their individual guides would permit. China is experienced as something outside the window of a large black car which refuses to stop for her; a series of briefing rooms and banquets. For Miller, contact with China is achieved through probing; for Morath, through dining. Encounters with one superbly cooked dish after another, meal after meal, is as close to a sustained, satisfying dance with China as Morath’s handlers would allow her.

Thus, as its title suggests, this book presents the reflections of two Americans, “well disposed and trying to see and listen” as they encountered China and the Chinese. Just as it shows their experience of China’s historical culture through images of the sites they visited, the book also portrays Morath’s and Miller’s experience of China’s contemporary culture through meetings with its most notable representatives: actors, writers, painters, and others, many of whom had suffered during the Cultural Revolution. Their texts stress the importance of these human encounters between artists from different cultures who discover, through work and conversation, that they share a great deal in common. Morath’s underlying thread emerges most strongly through her descriptions and photographs of these encounters, tracing the history of an exchange that began in conversations between these American visitors with their Chinese hosts, and culminated, five years later, in the cross-cultural collaboration to produce Death of a Salesman in Beijing. “I am especially interested in photographing in countries where a new tradition emerges from an ancient one,” Morath wrote. Certainly, China in 1978 was a country where civilization and development were subject to critical scrutiny, and both ancient and modern traditions were being publicly re-examined for their validity within a culture of change. What distinguishes Inge Morath’s photographs of China from other, similar bodies of work, is her urgent desire to comprehend, and to convey in pictures, what Miller describes as “China’s contradiction;” the ongoing struggle of new traditions in conflict with ancient ones. Although Morath is drawn to the beautiful and mysterious, the intensity of her experience and the intractability of her subject defy simplification. Morath encountered China as an irresolvable question, a dialogue between tradition and modernity within which beauty and tyranny collide again and again. The awareness of China’s greatness, and of the concurrent greatness of her tragedy, is pervasive.