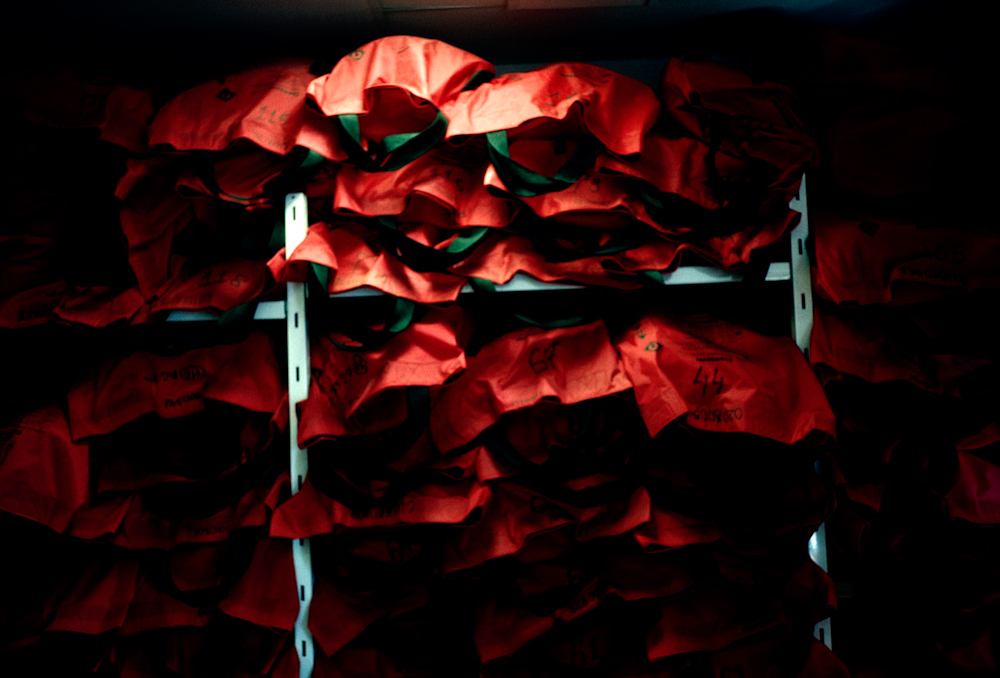 Kazakhstan is the ninth country in the world for extension. Its history begins with the nomads in the steppe until the Russian invasion in 1890, which persists until the fall of the Soviet Union and the election of president Nazarbayev in 1991, who declares the Republic of Kazakhstan.

The first oil discovery is dated 1979, when Kazakhstan was part of the Soviet Union, but considered a giant desert for nuclear garbage. In the past twenty-eight years, everything changed for Kazakh people. The fall of the Soviet Union in fact had many hard consequences on the population, result of the country’s total dependence. From 1991 the main export becomes oil and in 2003 they are valuated more than 7 billion dollars, representing 65% of the total.

Isle D is the only example in the world of artificial Isle built to extract gas and oil from Kashagan, a field in the north part of the Caspian Sea in Kazakhstan. Discovered in the year 2000, this field is considered to be one of the major Oil discoveries in the past thirty years and is assumed it will produce nine to sixteen milliard barrels. The weather conditions are extreme since the temperature goes over 40° C in the summer and below -30 in the winter. About 3000 people work on the Isle during the summer, while this number decreases during the winter. The workers have 12 ours shifts and stay on the Island 28 Days to 6 months.

Close to the on shore base of Bautino, there are few villages, where, during the Soviet Union, Stalin used to send the politic opponents. In the village of Atash, there is a lady called Asiya Kesikbaev, who had a very tough life. She doesn’t have a job and has to survive with two kids asking for food to the people who work for the factories in the Bautino area. She doesn’t have a house and her children sleep with the grandmother while Asiya uses the basement. Asiya’s husband repudiated her when their son was six months old, but, as a consequence of cold and malnutrition, the baby dies. Not far from Atash there is Sampe Gulbarshyn’s village. The old name of this village was Karagan, but Sampe doesn’t look too sure when she talks about it. About twenty years ago, her neighbors where farmers and fisherman’s, but then slowly everyone left, leaving her alone in this lunar landscape. Now she lives with her animals and the seldom visits of a relative.

In December 2008 the Organization for Security and Cooperation in Europe accuses Kazakhstan for lacking of the fundamental human rights concerning freedom of thought, conscience and religion, freedom of expression and freedom of assembly. The document about human rights in Kazakhstan asserts that there is a climate of quiet repression, which causes silence on certain topics.

According to the Bureau of Consular affairs of the U.S. department of state, the area of Alma-ata, the old capital, in the southeastern side of the country, is ranked on the fourth level (the highest level assigned) of earthquake threat and does not have the sufficient resources to respond to a large-scale disaster.

In the Tekeli Village about three ours drive from the city of Alma-ata, several earthquakes caused many damages to the old houses built during the Soviet times. Apparently the local government, doesn’t give much help to the victims and, since the area is poor and with a high level rank of unemployment, the inhabitants don’t have the resources to fix the houses. In the suburbs of Alma-ata there is the Shanyrak microdistrict, an area of abusive houses. In 2006 the Alma-Ata City authorities wanted to destroy the homes of settlers who have built poor but dignified living quarters on the outskirts of the city. Many of those who live in Shanyrak were driven out of their last homes by the collapse of industry in Kazakhstan, in the early and mid-nineties. In May 2009 a flood destroyed a big part of this district, only 60 families will have new houses. The Kadyrkhan family, for example, had very hard consequences after the flood. One of the house’s wall was demolished and also the floor of the parents room. Since the help from the Akimat was late to come, they had to rebuild on their own.

After the Oil discoveries, president Nazarbiaev, who is still in charge, says, in a famous speech, that Kazakhstan will become “The Lion of Central Asia”, and decides in 1997 to move the Capital from Alma-ata to Astana, at the time a small village in the north western side of the country. A huge amount of money was used to build the new Capital. High profiled architects such as Norman Foster, were called to build a pyramid (The palace of peace and reconciliation), a fake earthly paradise Ak Horda, a giant tent shaped building, with tennis courts, beaches, volleyball courts, where the internal temperature is going to be fixed around 24° C), skyscrapers and buildings of any kind.

The aim of this project is to show the contrasts that the Oil discoveries raised in this country. On a side there is the new generation of young businessman and woman who live a totally westernized life in Astana, on the other one there is the largest part of the population, whose history is still-motion movie.