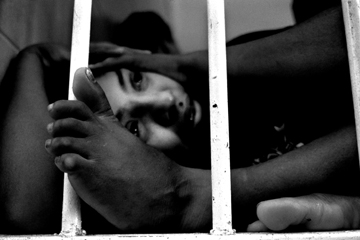 “He who has seen hope, will never forget it. He seeks for it under every sky and among all men. And he dreams that one day he will find it again, He doesn’t know where maybe among his own kin. In each and every human being is the possibility to be or more accurate, to be again another man.” – Octavio Paz

Every day hundred of undocumented migrants mostly from Central American countries try to cross Mexico on a journey fraught with danger, risking their lives to fulfill the dream of a better life as workers in the United States. This journey through Mexico begins in Chiapas at the shared border between Mexico and Guatemala, where migration controls are minimal; being a very rough geographic zone where migrants can easily cross illegally. There are no official records about the number of people crossing the Mexican border illegally everyday; the only official data is the number of migrants detained by Mexican authorities and send back to their original country. This year, 96,013 illegal migrants were caught crossing the Chiapas border, 44.5% of the total amount of detention in the whole of the Mexican territory.

Impunity, corruption and violence abound across the border, and are something that the migrants have to endure, besides dealing with military, migrant and police authorities and the civil population in general that take advantage of their fragile situation to extort them, rob them and violently assault them. And if they manage to survive that, they still have to face the danger of the gangs that are spread out all along the border line that will kill or rape them if they catch them, not to mention the great deal of accidents along the way that will crash their hopes of fulfilling their dream.

This is one of the most critical stages of the journey to the United States. The harassment and extortion of migrants is a common thing they have to deal with. The consequences for crossing this border are inevitable, only a few of them can get through successfully. Survive, die or stay in one place.

My project presents photographs that describe and synthesize the journey and the circumstances of illegal migrants through this zone of the country; one of the most important pieces of my work in the border is the freight train that crosses Mexico. Its importance as the only means of free transportation to their final goal the northern border, whilst avoiding immigration police check points. The journey by freight train is dramatic and perilous. Illegal migrants either survive the journey or are mutilated in frequent accidents along the way.

Every year the member of migrants traveling to the United States has increased in number and the official policy of the Mexican government to deal with this phenomenon has merely created yet more ways of trafficking people, only increasing the price of corruption and the dangers of crossing Mexico. It would seem to act more as a filter to let only the strongest to survive this journey.

The memory of Mexico left in the minds of the illegal aliens fleeing the poverty of Central America is the repeated violation of their civil rights by the Mexican authorities and the xenophobic attitude of the society along the border.

Bio:
Claudia Guadarrama was born in 1976 in México City. She graduated from National Autonomous University of Mexico in 1999, where she studied Political Science.

In 1997 studied photography and two years later she started to work as photojournalist and editor of photography’s assistant in the Mexican newspaper Milenio Diario for a period of three years. In 2001 she began to work on extensive photographic essays centering on political and social issues in México and Central America. In 2003 she became a freelance photographer.

Claudia has received several Mexican awards and grants. In 2004 she was received the Magnum Inge Morath Award as well as she was winner the Canon Female Photojournalist Award 2005 at Visa Pour L’image.