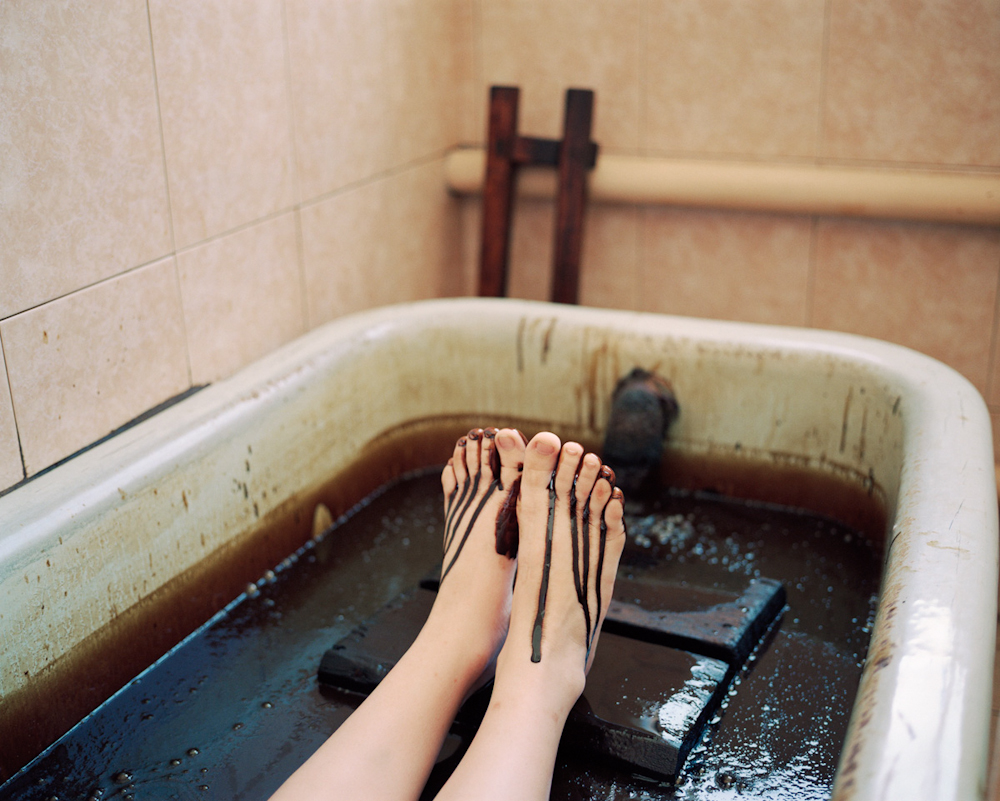 Languishing quietly between two great continents, the Caspian is the world’s largest inland sea. In 2010 I travelled to its edge, to the point where Asia dissolves into Europe. For centuries, surrounding powers have laid claim to the region; first the Ottomans, the Persians, the Mongols and most recently Soviet Russia. These Empires have ebbed and flowed, each one leaving its mark on this enigmatic landscape.

In the 10th Century, oil was discovered on the Caspian coast near Baku, the capital of Azerbaijan, and has been exploited ever since. The boom of the late 90’s brought the current wave of prosperity to the area. However, Caspian crude oil is not only used conventionally as fuel: since long before mechanized extraction it has provided a curious health treatment.

In the “spa town” of Naftalan people gather to bathe in the chocolate-brown goo, which is purported to have therapeutic properties. Here, a substance normally associated with power, wealth and global trade is used for healing and wellbeing. They call it the ‘miracle oil’ and it has been bathed in for centuries.

As the Caspian oil industry continues to grow, the distribution of wealth is increasingly skewed. Migrants trickle toward the port city of Aktau, in Kazakhstan, finding work constructing elaborate mausoleums for the new oil rich middle class. I spent days camping among the workers, watching them saw through blocks of limestone and digging graves. Some of these tombs are engraved with drawings of nodding donkeys: symbols of the oil industry that have even crept onto the monuments to the dead.

After decades of Soviet rule, much discussion arose as to how the newly created countries would find their individual identities. For those on the edge of the Caspian Sea, that search has been coloured by oil, a substance which existed beneath the ground long before the land was inhabited.

This mysterious resource, both lucrative and destructive, pervades the atmosphere of the region. The way I travelled affected my sense of the place too: hitchhiking and camping caused me to think more about the distinct character of the place – the flatness of the land, the colour of the soil, and quality of light. I wanted to capture the relationship between the people and the land, bound up with one another in subtle and often unexpected ways; for every ecological scar left on the land by powers of the past, is a wound to its people.

This body of work stands as the first chapter in a long-term project that will develop into coastal Russia, Turkmenistan and Iran.