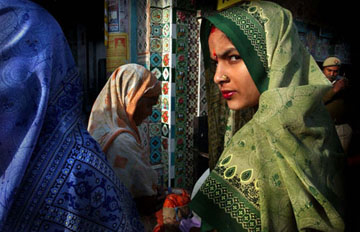 The conflict has eroded much that once defined Kashmir. Hindus and Muslims once shared neighborhoods, schools, and close friendships, but nearly all the Hindus fled Indian-governed Kashmir after being threatened by Muslim militants, and are now scattered across India. Sufism, which exerted a gentle influence on Kashmiri Islam for more than a dozen generations, has been gradually pushed aside by the fanatical Sunni Islam practiced by militants from Pakistan. For centuries, Kashmir’s Mughal gardens and wooden houseboats offered diversions to weary rulers. But leisure has vanished from Kashmir. No one visits, and fear has tainted the lives of those who make their homes amid its apple and apricot orchards, in its meadows and in the creases of its mountains.

I wandered briefly into the poetry of Kashmir in November of 2001 and could not let go. Whether trudging through the perfectly etched landscape that included rice fields cascading into the valleys like delicately carved staircases, sipping saffron tea in the warmth of a Kashmiri home or being cradled in the tranquility of a wooden shikara, a gondola style boat, on Dal Lake, this place filled me with affection. I wanted to understand Kashmir and delve below the glassy reflections in its still lakes. The mountains were mirrored perfectly until the oar hit the water, a crack rippled through the reflection and one began to sense that all is not what it seemed. Srinagar, the summer capital of Kashmir once bustled with life and laughter. Now it lies neglected and pockmarked with craters. Hotels have been turned into barracks, guns peek out behind broken glass windows and netting protects the bleary eyes soldiers from the frequent grenade attacks. The surrounding mountains, once lush and dotted with delightful Alpine cottages sit quietly as structures deteriorate and collapse.

The poetry of this magnificent culture has degenerated into the language of mourning and everyone here is held hostage to the suffering. The gaping hole of years of conflict have been filled with the corpses of young men and those spaces that remain free lie waiting to devour still more. It is my desire to give justice to the beauty, strength and suffering of Kashmir’s people and to the unique richness of their history and culture. I hope to inspire in others the feelings that Kashmir has given rise to myself, particularly the simultaneous apprehension of beauty and terror. I believe that all the inherent beauty will survive despite humanity’s ongoing attempts to control and destroy it. Because in this intricate place, where truth and fiction are sometimes inseparable, politics and poetry overlap, the pain is sometimes too great to bear, yet joy is still possible.

Bio:
Ami Vitale attended the University of North Carolina before working for Associated Press as a picture editor in New York and Washington, DC. She worked overtime to get enough money to make the break, initially basing herself in the Czech Republic and working around Eastern Europe. In 1995, she had visited her sister, then working for the Peace Corps in the tiny and remote village in the east of Guinea Bissau. A grant in 2000 from the Alexia Foundation for World Peace enabled her to return there to photograph in 2001. She stayed for half a year in a mud hut with a woman named Fama and her children, sharing their lives, living, eating, sleeping as they did, and helped in their everyday tasks. Since Guinea Bissau, Vitale has been based for several years in India, producing memorable work from Kashmir, Gujarat and elsewhere. Her pictures have appeared in exhibits and magazines around the world, including the major publications such as Geo, Time, The New York Times, Newsweek, National Geographic Adventure and more. She also has a list of awards, including World Press Photo, National Press Photographers Association, POY International, and many others One of them was the Canon Female Photojournalist Grant which concluded with an exhibit in Perpignan, France.

One thought on “Ami Vitale: Kashmir”