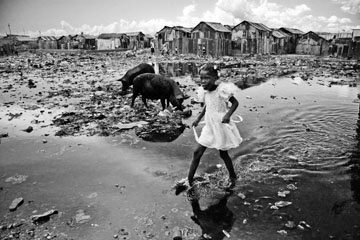 In 1804 Haiti drew attention by becoming the first black republic to declare independence, while today it attracts attention for its struggles with poverty and corruption. Even though in the past Haiti’s individualism symbolized the ambitions of the world’s enslaved people, they made no effort to inspire or to help other slave rebellions because of the fear that the great powers could retaliate against them. For the sake of national survival, nonintervention became a Haitian tenet. As a result it is nowadays the poorest nation in the Western Hemisphere and has witnessed many corrupt leaders as well as substantial exploitation by foreign governments, especially by the United States and France. The country has always been considered as a place where anyone enriches himself of the backs of the poor, whilst major powers supported dictators to maintain their dominance in order to continue exploiting the country. It is the archetypal example of a system that sees the rich get richer and the poor get poorer.

It is perhaps no surprise that Haiti has been ranked as the most corrupt country in the world by Transparency International in 2006. The nation has lost faith in their leaders.

Even though the violence has decreased since the UN started a breakdown in the beginning of 2007 to catch and imprison the gang leaders, institutionalized poverty and the high rate of unemployment have created a hopeless situation for most Haitians. Clean water, food and electricity are in short supply whereas typhus, malaria, dysentery, tuberculosis and Aids are abundant. People are eating mud cakes to survive.

We have already seen many pictures of poor people starving and dying around the world, and I want to go beyond stereotypical images of poverty. I am interested in the human impact of what an uncertain political situation can provoke. The lack of a social system has resulted in weak healthcare and education, near universal unemployment, high criminality and mortality rates, illiteracy and a missing infrastructure. Children, almost half the country’s population – and Haiti’s future of course – endure slavery or a life on the streets where prostitution and underpaid jobs are part of everyday survival.

During the first trip my primary focus was young families, healthcare, war memories and the difficulty of growing-up in Haiti’s capital Port-au-Prince. Looking back and contemplating the little albino boy covered with skin cancer, the nine year-old mother and the eating of mud cakes – made from REAL mud, I feel my goal must be to raise awareness of this critical situation that is primarily caused by the exploitation of the US, an alleged ‘friend’. My experience last year made me realize that I simply scratched the surface of a boil that needs to be lanced.

The photo-documentary I am planning not only will offer a view of the poor and the struggles but also a comparison to the 5 percent of the rich citizens, who are living in the mountains around Port-au-Prince apparently in ignorance of what’s happening… whilst growing ever richer. With strong social commitment and an intuitive way of dealing with people I will try to overcome social and personal boarders in order to get really close to the core of the subject that matters. I don’t mean to shock the viewer of my photographs, but to touch their feelings.

I learned from Philip Jones Griffiths that if you cover just a small number of things but narrow and deep you create something that ultimately lasts.

Bio:
Alice is a freelance photographer currently based in East Belgium.She has traveled extensively and is focused on photographing social issues, at present concentrating on Haiti and its nation perseverance. Alice has interned for Noor in Amsterdam and assisted for Philip Jones Griffiths.